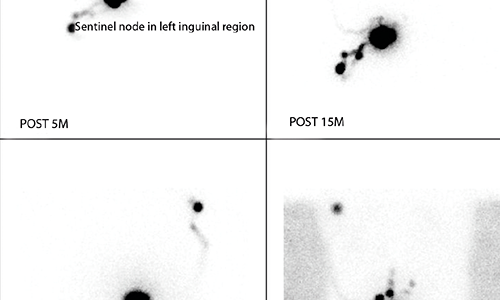 When the letter for this appointment came through the door I must admit I did wonder what the hell it was. I hadn’t remembered the doctor saying I’d need this scan and initially started to worry myself that they’d found something else on the MRI and that’s why I needed this additional scan.

The leaflet enclosed with the appointment said that having a nuclear medicine scan is similar to having an x-ray and that a small amount of radioactive dye is injected into the body which can then be scanned by the camera. The amount of radiation received is similar to having an x-ray and there weren’t any ill effects afterwards but that it recommended not having close or prolonged contact with children or pregnant women.

We arrived at the scan and after a short wait I was called in by a nurse.  She asked me to undress to the waist and lay on the scanner bed with a blanket over me. She then said she needed to inject my breast with a very small needle that contained the radioactive substance. This wasn’t too painful actually and luckily was over very quickly. She positioned the bed so I was close to the scanner (a gamma  camera) and moved it up to close to my body. She then explained that she’d then be checking the monitor that was above me to see which sentinel node the radioactive fluid was travelling to.

What I could see on the screen was something similar to the above, showing the site where the dye had been injected. The nurse needed to see which lymph node it then travelled to which would determine the nodes to be removed and tested in surgery.

She monitored this for a few minutes and then asked me hold my chest – no change in the fluid.  She then gently put my arm into a different position to see if that would help the movement of the fluid. For some scans the pictures can be taken immediately, but for others it’s possible to have to wait up to three hours before the pictures can be taken. The nurse was about to ask me to sit myself up and get dressed when she said she’d try one more time and luckily the liquid started to travel.

The nurse said that because I’d had this scan I was likely to be first or second on the operating list in the morning. She kindly gave me directions on how best to get to the theatre admissions ward in the morning as it’s apparently easy to get lost if you go in the wrong entrance of the hospital!